I felt like I needed to talk about this guy. According to Amazon, he is a star, all his books are rated over 4 stars by customers. A comment by one user on Weeks’ The Lightbringer Series is: “Brent Weeks has improved his writing a lot since the Night Angel trilogy. Definitely worth a read”. This is a thought mirrored by many on the forums, especially those who participated in the book club. Not all bow down before him however. 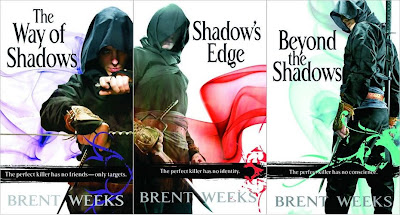 Jon Snow thought his Night Angel trilogy stunk of deus ex machina and as one of the top contributors from the forums, well read and all around good guy, I had to weigh his opinion against mine. I liked the Night Angel trilogies, but the more I thought about it objectively, not at the ‘end of the series high’, I realised it wasn’t as great as I had thought. I didn’t read the Black Prism when it came out as I wasn’t sold on Weeks so much as to drop the other books in my to-be-read pile. Then The Blinding Light came out and forum members were clamouring for a book club. I created one, then due to life, I only read the sample chapters. I really liked it, but when reminded it wasn’t the first in the series, I once again put  Weeks’ on the back burner.

What makes me reopen this new series tonight? (yet to be finished) The answer is a few interesting posts made on babel clash.

I think Jon’s biggest problem was with the ending of the Night Angel trilogies. Here Weeks talks about how he feels endings need to work in order to honor the time and money a reader invests in his books. I for one think he made a great point..

Book finales are a different beast. I believe each book–even in a big fantasy epic–should tell a complete story. Say, the characters all care about saving the city. By the end of the book, the city should be saved or lost. The more plotlines you actually wrap up, the more satisfying I think the book is: the guy who wanted to be king gets killed (and now will have considerable difficulty becoming king); the assassin who wanted to leave the business has left it; a new king is in charge. Point is, the story ends. If you thought it was just okay, or not that good, well, at least you got a whole story. You can move on to greener pastures.

I recently read The Fallen Blade and The Outcast Blade bu Jon Courtenay Grimm.  The second was much better than the first and it ended without much of a cliff hanger. The reason I continued to read it was because 1. The book club and 2. It was available 3. I wanted to. On the other hand you have books like George R.R. Martin and Brandon Sanderson whose books I’m going to need a refresher on before getting to the next one. Whose books, when I’m done, feel like they just gave me a taste of chocolate and then said “wait a few more years for another square.” Please don’t misunderstand me. I love both those authors it is jut another way of ending a story.

(This is from Sanderson)

Readers seem to have a love/hate relationship with the series, at least in our genre.  Stand alone books, as a rule of thumb, do not sell as well as series books. And yet, the longer a series goes, the less pleased readers seem to be with it.  If one looks at most series and compare reader reviews, the longer the series goes, the worse the reviews tend to get.  It has happened for nearly every major fantasy series.

I think Weeks recognises he can’t please everyone and is committed to his idea of his role as professional author. I really admire that.

What I owe readers:

2) Courtesy. Some fans are louts. Lots of people have louts who pay their salaries. They deal, so can I.

3) Honesty. For professional reasons, readers don’t get to know everything, of course. And sometimes Thumper’s Maxim applies. But if I KNOW my next book is going to be late, or that I’m not going to be at a conference I said I’d be at, or can’t do an interview or whatever, ‘fess up.

After reading his comments and views on how he writes, how others write and how he feels about his readers, I will be starting The Black Prism. I am looking forward to a writer that lets me finish a book, a stand alone in a series. I dare say, I will enjoy it.