Douglas Hulick’s 2011 debut novel Among Thieves was one of my favourites last year. It is the first book in the Tale of the Kin series. The sequel is set to be published early next year. 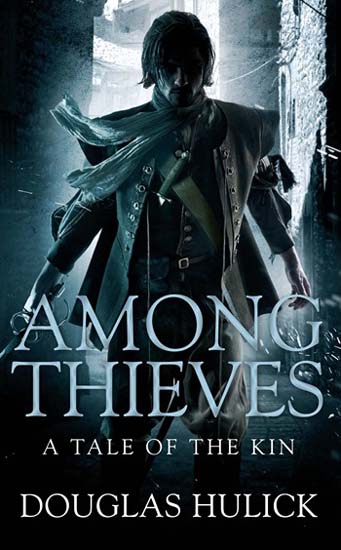 Drothe is a thief and makes a living in the city of Ildrecca, of the Dorminikan Empire. As a thief, Drothe is part of the Kin (common name tagged to thieves, assassins and what have you), the shady underworld, and he makes a living as a Nose. He specializes in information brokering; gathering information and spreading rumors. He does this for Nicodemus, an Upright man. Upright men are smalltime underworld bosses, and Nicodemus primarily rules through strength of arms.

The empire is ruled by the undying emperor, Stephen Dorminikos, whose soul has been/is split into three incarnations, each ruling in succession. This has created stability and peace, but also given way to a religion centered on the three reincarnations of the emperor. Although, as events unfold, not all is as it seems in the Dorminikan Empire.

There is little glimmer (magic) in the story because it’s exceedingly rare, but what little there is, still plays a central part. As the story unfolds, unseen motives and puppeteers are revealed. All this just adds to the depth, and while it may sound confusing, it’s not.

The premise of the story is solid and the characters in conjunction with the story works very well. Without revealing the central storyline, it’s safe to say that Drothe is thrust into a war between rivaling factions of the Kin, which he has to prevent.

What I really like about this book is Drothe. He’s surprisingly capable and quick witted. But you’d have to be, to work as a Nose. Drothe is something as unoriginal as a lovable scoundrel. He’s a mix between Locke Lamora and Harry Dresden, and he works out brilliantly! The emperor character was also very interesting and I look forward to the many possibilities that he could be used in future books.

There is no way around the fact, that there are some similarities between the Lies of Locke Lamora and Among Thieves. But where this book really shines/separates from Lies and other books in this genre is in the scope of the story and the world building. Hulick has prepared the way a long series of books, with a lot of potential.

What makes this book great is partly in the clever way it’s written, but also the main character Drothe, who delivers a fantastic performance throughout the book.

Where among thieves stands out, is the story and the many places it can go from here. It’s cleverly told and there’s a larger perspective, compared to other books in the same genre.

Douglas Hulick pulls off a splendid debut and I can’t wait to read the next book. If you’ve read The Lies of Locke Lamora and enjoyed it, then pick up Among Thieves.

This review was written by Laurentius for bestfantasybooks.com

Sworn in Steel by Douglas Hulick