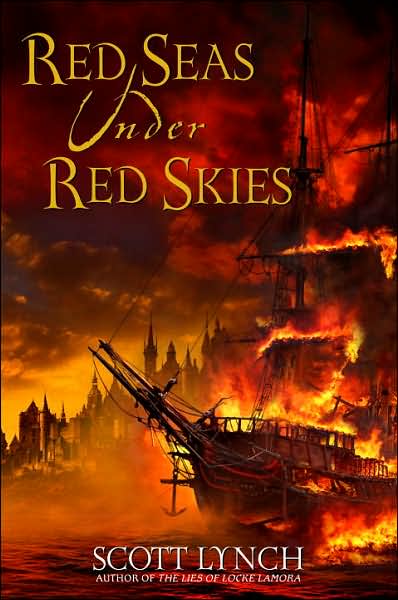 Red Seas Under Red Skies represents a significant shift in tone and style from its prequel, The Lies of Locke Lamora. It begins two years after their escape from Camorr, a still emotionally shaken Locke, accompanied by the sturdy but increasingly desperate Jean, hatch a plan to relieve the nobles of Tal Varrar of their substantial wealth. Power in Tal Varrar is trifurcated between the power-hungry Archon, the oligarchic Priori and off to one side, Requin, owner of the Sinspire, a lavish casino, and banker to the wealthy.

You’ve undoubtedly guessed already that their plan is to rob the casino. To the quarter or so of you who haven’t already dashed off to purchase the fantastical Ocean’s Eleven there’s a catch. This is not the usual plan, prepare, orchestrate and become filthy rich format we expected, there is a third party vying for power and it is his scheme Locke and Jean undertake.

Lynch’s writing has markedly improved between novels; the occasional awkward bit of dialogue, description or exposition has all but disappeared. But where he has most improved is in his ability to draw tragedy. Which is not to say Lynch’s wit has disappeared, it has merely become more sardonic and more often voiced in moments of hardship rather than confidence; it’s a way for his characters to face the world.

The book does offer up some disappointments; his world building, while still incredibly creative and entertaining, remains quite unsophisticated. It’s also a bit slow to start and is drawn out a few chapters too long.

In some ways Red Seas Under Red Skies is very similar to The Lies of Locke Lamora. The difference is that Red Seas Under Red Skies is bigger and more ambitious, less funny, perhaps, certainly less light-hearted but with all the great characterisation of the first novel and a finish that rivals its predecessor and a denouement that far outstrips it. It’s hard to say that it’s a better novel, in spite of all of their similarities, it’s a different one; darker-toned, more complex and far more emotionally engaging, Red Seas Under Red Skies succeeds in a way The Lies of Locke Lamora never quite managed while sacrificing little of what made its predecessor a great book.

**This article was a contributed by an anonymous fantasy reviewer**

Review and Giveaway: The Republic of Thieves by Scott Lynch

The Republic of Thieves

Review: The Republic of Thieves by Scott Lynch