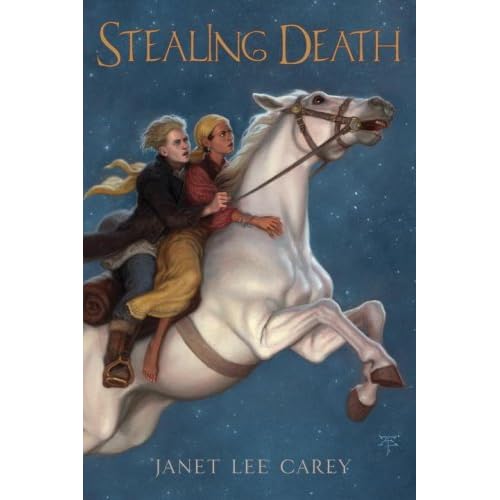 Kipp, a 17 year old boy is robbed of all his family except his baby sister to a deadly fire. On that night he saw Death come for his family and steal their souls with Kwaja, the soul sack. Kipp vows to get his family back and that means confronting Death himself.

Stealing Death is a novel by Janet Lee Carey written for people 12 and up. This book was a very action packed book and there is always something happening. Carey writes with a startling pace and describes her world with much flare. We are thrust into a world where people still believe in dragons and the worthiness of a man are determined by the length of their hair and the many different coloured beads in them. Slavery is still rife in this world and the punishment for crime is worst than slavery. Carey’s strongest suit is probably in her characterization, especially of Kipp. She has made Kipp in every way a 17 year old boy would be like. Young love, rash decisions, thinking what he thinks is the best for those around him are just little tidbits of Kipp’s characters and Carey really did a good job of him.

Although the book was action packed and the world intriguing, this book felt like an adult fantasy book that had been diluted for the younger readers. A few things weren’t explained enough leaving me groping for more information.

Unpronounceable names are a pet hate of mine and although these were unpronounceable they were confusing. Gwali (Death, Kwaja (Soul Sack), Techee (Fire) are but a few names that add a little bit of flavour to the story but not enough to cover the confusion we get at the beginning of the book. For younger readers it will be even more confusing (leading to one the girls in my class to put it down because she didn’t get it.)

Janet Lee Carey has a lot of potential to be a great author. Her characterizations are strong; she is imaginative, the book is action packed (which keeps the kids hooked) and she has a strong foundation for some good world building as well. However, I have a feeling that she may be writing for the wrong target audience.

To Rate or Not to Rate