Two boys, Tim and Merthyn study at Culver Academy. Avid lovers of fantasy, they were very eager to visit the sword display at the Academy’s library, among the swords were the famed swords Excalibur and the Sword of El Cid. Unbeknown to the boys, an ancient evil had arrived around the same time they happened to be viewing the swords. What would the two boys do? What else could two lovers of fantasy do? They break the cases containing the swords and fight their way out! 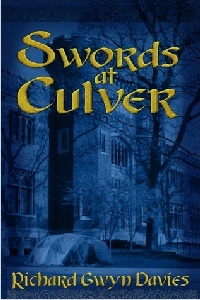 Swords at Culver is the first of a series of books written by Richard Gwyn Davies. It is a fantasy novel set in modern day times. A lot of real references are used to help the reader relate to the book. The story has 4 main characters, Tim and Merthyn (the boys) who stumble upon the evil, and Mr. Meek and Mr. Davies, two teachers at the Academy, whom together help the boys in dire straits.

At the first mention of Excalibur I couldn’t help myself but groan, but as I read on, the focus was more on Native American Indian lore, which intrigued me. Yet that one thing that interested me, wasn’t explained in detail, everything seemed rushed as if the Davies thought it would bore the reader. With the main characters being teenage boys and the length of the book being short (225 pages), perhaps Davies was targeting YA readers, and this is how I treated the book when I read it.

What I have learnt from reading many YA books is that a successful YA book contains young characters, they have special powers, it is fast paced and readers can relate to the main characters. I think Davies has the first three done, but the last one I am not so certain of. Yes, readers can relate to the books, as it is set in modern times but relating to the boys or the teachers? I’m not too sure of.

Davies has a sequel to this book called Buddha at Culver, which I will read and review at a later time as I am hoping for more ancient lore.

Review: The Buddha at Culver