A little disclaimer. I haven’t used one of the new Kindles yet and would love to (hint hint amazon!), so what I am telling you is what I see from their website and what I know about past Kindles and tablets.

As we’re all avid book readers here, I’m just going to tell you about what you need to know, what I think might interest you and I’ll try not to get too technical on you (without explaining). 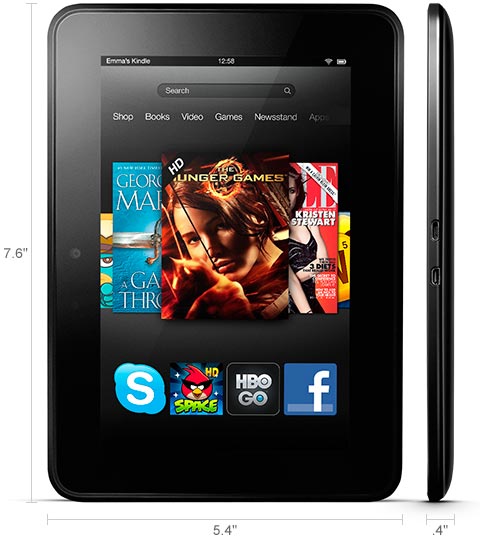 First off, the Kindle Fire was game breaking when it came out. Finally a tablet that was very cheap ($199) that could do mostly what the other tablets could do. It was what consumers craved and no longer had to be bullied by other companies into paying $499 for the most basic models (ASUS later came out with a $399 version).

So what’s different between the Kindle Fire and the Kindle Fire HD 7″? Besides a $40 difference, the new Fire is slightly squarer, is 5 grams (0.2 ounces) lighter, has 8gb more storage, up to 2 hours more battery life, has micro-HDMI port to high definition output to televisions, 10 point multi touch (old only had 2), ambient light sensor (auto adjust brightness), gyroscope, dual band wifi, external volume buttons, front-facing camera, built in microphone, built in bluetooth and last but not least it is High Definition, meaning more pixels on your screen.

Now that is a lot more stuff for $40. But what does that all mean? It simply means, you get more storage, higher quality wi-fi, more usage before a charge is required, crisper imaging and the front-facing camera is nice to skype with if you are sick in bed. Everything else is just gravy.

I really can’t express more how impressed I am with the Kindle Fire HD 7″. You get so much bang for your buck and you have the great amazon ecosystem to work with.

Are there negatives? Yeah sure, like it doesn’t have external storage or back-facing camera but seriously at $199, some things are going to be missed out. If you want those things, then just simply pay more. 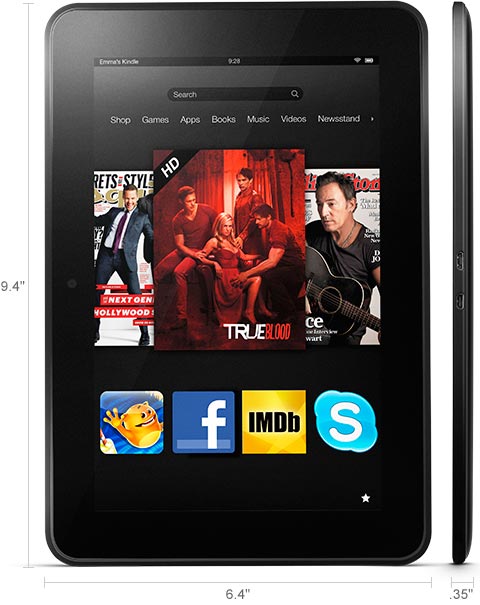 This Kindle is at the best tablet size ever, 8.9 inches. It’s big enough that it reads magazines much more nicely than the 7″ and it isn’t  in my opinion, too bulky like the 10.1″ tablets from other brands. Besides the larger real estate which comes with 1920×1200 resolution, play back at 1080p and has more power processing power 1.5ghz compared with 1.2ghz (7″).

Again what does this mean for you? It means even crisper images than the 7″, higher definition movies, the ability to use external storage without pesky add-ons from other companies and faster processing power.

At the moment, amazon doesn’t state how long the battery life is, but I would bet my bookshelf that it would be at least 9 hours of continuous use, if not 11 hours. Usually something better with a bigger processor also means a bigger battery.

Personally, I would much rather pay the $100 more to get all the extra goodies.

Again the only down side to this would be the no back-facing camera. I would much rather give up the front facing one as I don’t skype, but hey you might do!

Now these two are really much more for book readers, and people who want some light entertainment on the go. If you want more heavy duty use, movies etc, then I would go for the 8.9″ 4G LTE Wireless version. At $499 it’s quite a bit of change, but you get another 16gb of space and blow your mind fast internet to stream Amazon Prime, which works great with your free cloud storage for all Amazon content.

Hopefully I’ve helped you make a more informed decision when you decide to buy a tablet of sorts. If you have any questions, just ask below!