Owns a Ring of Power 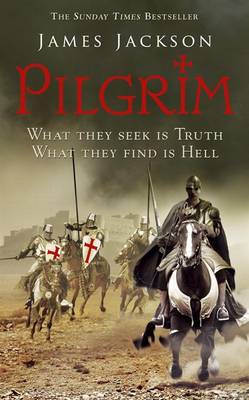 This exact novel has taken a too long time to finish, merely because of 2 reasons:
- Its events >.< which I shall describe after a few lines…
- Metal Gear Solid Phantom Pain, which made me busy hunting Soviet, Afro and Afghan’s soldiers to build up my own private army >.< which I am NOT going to talk about again in this post

Pilgrim is a novel that has its events running through a time of great turbulence and disturbance in the known world, which is the time of the crusades and the high tension and conflicts regarding the ruling over the Holy land of Jerusalem.

One of the main things that I have admired about the author is that he praised both Christians and Muslims equally, I was proud to see a Christian author describing great Muslim leaders such as Salah-udin and his brother Al-Adil with greatness and valued their actual tributes, if anything, this should be a major positive point for the favour of the novel... unfortunately, it would be the only one >.<

I believe that this combination was essential, otherwise using only 1 or 2 of them would make the novel much shorter... maybe cut it down to a bed time story!!!!

Personally, I have got my own preservations regarding the flow and events of the novel, such as:
- The heroes meet a seer who keeps himself locked in an underground dungeon for some reasons, which is fine by me.. seers must be found in weird places after all, however, and bsed on my personal experience with seers in novels, they usually use hints, play with words and gave vague statements.. While this one was really talkative.. I believe that Druss and Skilgannon and the rest of David Gemmell characters would cherish meeting such a seer! It would have made their lives much easier…..

- The events have some issues with time frame and time flow as it seems that events and characters are having some sort of "Spacetime" travelling ability.. As in one time the kids were kidnapped (which happens very frequent throughout the story by the way), and Otto and Hugh went after them to save them... suddenly the friar is found in the next paragraph closing to a costal city and hiring a ship to spy on some plotters...... I guess using such speed to rescue his kidnapped friends would be much more appreciated!!
In another point the main characters were setting together, and in the next paragraph Hugh of York has travelled all the way to his town, had time to gather his drunkard friends for a final fight.. Hires a ship.. and becomes somewhere in the middle of the Mediterranean. It just drives the reader to ask… where the hell where you all that time?????????????? Couldn’t you just gather those knuckleheads some 100 pages earlier?
Finally, a part of the novel have the characters talking with each other.. the next paragraph has Hugh of York going to a secret hideout where he has imprisoned a very trustworthy and close soldier to the Lord of Arsur… and I was like…… "did I miss some pages? Or were some pages missing since I got the book?" unfortunatly, and after following the page numbering.. it seems that all the pages are in place…..

- I do not like stories which have all the villains dead at the last 15 pages.. it makes you wonder: what were the heroes doing throughout the story?