Visible
Crowd
A kind of fantasy book that focuses on the conflict not between armies and wizards but rather neighbors and peers, often set in an elaborate urban court setting. The characters are often Lords, Ladies, Dukes, and Kings.

0 Comments
Set in Victorian times, VICE VERSA concerns business man Paul Bultitude and his son Dick. Dick is about to leave home for a boarding school which is ruled by the cane wielding headmaster Dr. Grimstone. Bultitude, seeing his son's fear of going to the school, foolishly says that schooldays are the best years of a boy's life, and how he wished that he was the one so doing. At this point, thanks to a handy magic stone brought by an uncle from India which grants the possessor one wish, they are now on even terms. Dick, now holding the stone, is ordered by his father to turn him back into his own body, but Dick refuses, and decides instead to become his father, and so the fun begins.
21
0
0

0 Comments
"[Thorne Smith] created the modern American ghost.   A ghost with style and wit. A ghost that haunts us still."
--The New York Times

Thorne Smith is a master of urbane wit and sophisticated repartee. Topper, his best-known work, is the hilarious, ribald comedy on which the hit television show and movie (starring Cary Grant) were based.

It all begins when Cosmo Topper, a law-abiding, mild-mannered bank manager, decides to buy a secondhand car, only to find it haunted by the ghosts of its previous owners--the reckless, feckless, frivolous couple who met their untimely demise when the car careened into an oak tree. The ghosts, George and Marion Kerby, make it their mission to rescue Topper from the drab "summer of suburban Sundays" that is his life--and they commence a series of madcap adventures that leave Topper, and anyone else who crosses their path, in a whirlwind of discomfiture and delight.

As enchanting today as it was when first published in 1926, Topper has set the standard in American pop culture for such mischievous apparitions as those seen in The Ghost and Mrs. Muir, Heaven Can Wait, Beetlejuice, and Bewitched.
22
0
0

0 Comments
Gunpowder and alchemy! When the Goblin Moon rises, strange things happen. Coffins float down the river, hobgoblins crawl out from their dens, alchemists pore over ancient texts in search of the art of creating life . . . and one man fights a secret battle against cruelty and injustice, with wit, ingenuity, and a lethal lack of compunction.
23
0
0

The Paths of the Dead is Steven Brust's long-awaited sequel to The Phoenix Guards and Five Hundred Years After.

Two hundred years after Adron's Disaster, in which Dragaera City was accidentally reduced to an ocean of chaos by an experiment in wizardry gone wrong, the Empire isn't what it used to be. Deprived at a single blow of their Emperor, of the Orb that is the focus of the Empire's power, of their capital city with its Imperial bureaucracy, and of a great many of their late fellow citizens, the surviving Dragaerans have been limping through a long Interregnum, bereft even of the simple magic and sorcery they were accustomed to use in everyday life.

Now the descendants and successors of the great adventurers Khaavren, Pel, Aerich, and Tazendra are growing up in this seemingly diminished world, convinced, like their elders, that the age of adventures is over and nothing interesting will ever happen to them. They are, of course, wrong . . .

For even deprived of magic, Dragaerans fight, plot, and conspire as they breathe, and so do their still-powerful gods. The enemies of the Empire prowl at its edges, inscrutable doings are up at Dzur Mountain . . . and, unexpectedly, a surviving Phoenix Heir, young Zerika, is discovered—setting off a chain of swashbuckling events that will remake the world yet again.

0 Comments
In which our Heroes--Khaavren, Pel, Aerich and Tazendra--are reunited again a mere five centuries later...just in time for an uprising that threatens to destroy the Imperial Orb itself!

This is the story of the conspiracy against the Empire that begins in the mean streets of Underside and flourishes in the courtly politics of the Palace where Khaavren has loyally served in the Guards this past half-millennium.

It is the tale of the Dragonlord Adron's overweening schemes, of his brilliant daughter Aliers, and the eldritch Sethra Lavode.

And it is the tale of four boon companions, of love, and of revenge...a tale from the history of Dragaera, of the events that changed the world!
25
0
0 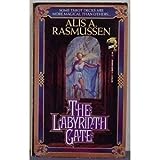 by Alis A. Rasmussen

0 Comments
DIMENSION TO DIMENSION... WORLD TO WORLD ~ A lady strays from a garden path and enters a different realm. A castle harbors a secret cabinet and a golden key. A king wages dynastic war for control of three kingdoms. Thus, a saga that rivals the wondrous worlds of Middle Earth, Dune, and the hitchhiker's galaxy, sweeps us into a fabulous cosmos of pure imagination. Here, villains plotting to take control of an alternate world and a mysterious, magical woman seeking her destiny are catalysts. They ignite a splendid pageantry of battles and quests, poisonous love and triumphant passion, doomed loyalties and unsurpassed courage in this "lost" classic by one of the fathers of modern fantasy. ~ THE ZIMIAMVIAN TRILOGY ~ Each of the books in this unique trilogy is an epic complete in itself. Read together, they form one of the greatest imagined worlds in fantasy literature. This new Dell edition contains recently discovered fragments of The Mezentian Gate, printed here for the first time, along with illuminating notes by E. R. Eddison scholar Paul Edmund Thomas, making this the most complete edition of Zimiamvia ever published.
27
0
1

0 Comments
On the mean streets of Regency London, a truly different adventure-with an unforgettable heroine

In a Regency London that isn't quite the one we know, young women of family whose reputations have been ruined are known as the Fallen. Young Sarah Tolerance is one such: a daughter of the nobility who ran away with her brother's fencing-master. Now that the fencing-master has died, everyone expects her to earn her living as a whore.

But Sarah is unwilling. Instead, she invents a new role for herself, and a new vocation: "investigative agent." For Sarah, with her equivocal position in society, is able to float between social layers, unearth secrets, find things that were lost, and lose things too dangerous to be kept. Her stock in trade is her wits, her discretion, and her expertise with the smallsword -- for her fencing-master taught her that as well.

She will need all her skills soon, when she is approached by an agent of the Count Verseillon, for a task that seems routine: reclaim an antique fan he once gave to "a lady with brown eyes." The fan, he tells her, is an heirloom; the lady, his first love. But as Sarah Tolerance unravels the mystery that surrounds the fan, she discovers that she--and the Count--are not the only ones seeking it, and that nothing about this task is what it seems.
Add item
ITEMS 20 - 27 of 27