This year, like every other, the magicians of Imardin gather to purge the city of undesirables. Cloaked in the protection of their sorcery, they move with no fear of the vagrants and miscreants who despise them and their work

Since childhood, Sabriel has lived outside the walls of the Old Kingdom, away from the power of Free Magic, and away from the Dead who refuse to stay dead. But now her father, the Abhorson, is missing, and Sabriel must cross into that world to find him. With Mogget, whose feline form hides a powerful, perhaps malevolent spirit, and Touchstone, a young Charter Mage, Sabriel travels deep into the Old Kingdom. There she confronts an evil that threatens much more than her life and comes face-to-face with her own hidden destiny. . . .

0 Comments
In this extraordinary fantasy epic, the

A Wizard of Earthsea

As the son of a lowly chalkmaker at Armedius Academy, Joel can only watch as Rithmatist students learn the magical art that he would do anything to practice. Then students start disappearing?kidnapped from their rooms at night, leaving trails of blood. Assigned to help the professor who is investigating the crimes, Joel and his friend Melody find themselves on the trail of an unexpected discovery?one that will change Rithmatics?and their world?forever.
A New York Times Book Review Notable Children's Book of 2013

0 Comments
The New York Times bestselling series that inspired the international hit video game: The Witcher.
For over a century, humans, dwarves, gnomes, and elves have lived together in relative peace. But times have changed, the uneasy peace is over, and now the races are fighting once again. The only good elf, it seems, is a dead elf.

Geralt of Rivia, the cunning assassin known as The Witcher, has been waiting for the birth of a prophesied child. This child has the power to change the world - for good, or for evil.

As the threat of war hangs over the land and the child is hunted for her extraordinary powers, it will become Geralt's responsibility to protect them all - and the Witcher never accepts defeat.
Blood of Elves is the first full-length Witcher novel, and the perfect follow up if you've read The Last Wish collection.
Witcher novels
Blood of Elves
The Time of Contempt
Baptism of Fire
The Tower of Swallows
Lady of the Lake
Witcher collections
The Last Wish
Sword of Destiny
The Malady and Other Stories: An Andrzej Sapkowski Sampler (e-only)
Translated from original Polish by Danusia Stok

0 Comments
Part of the 8-book Tamora Pierce reissue for Fall 2006, this title in the Circle of Magic quartet features spellbinding new cover art. Coincides with the release of WILL OF THE EMPRESS in trade pb.

Four elements of power, four mages-in-training learning to control them. In Book 1 of the Circle of Magic Quartet, gifted young weaver Sandry is brought to the Winding Circle community. There she meets Briar, a former thief with a way with plants; Daja, an outcase gifted at metalcraft; and Tris, whose connection with the weather unsettles everyone, including herself. The four misfits are taught how to use their magic, but when disaster strikes, it's up to Sandry to weave together four different kinds of power to save herself, her friends, and Winding Circle.
11
-1
2

0 Comments
Enter the world of the Seven Realms...
For the first time, all four books of the critically acclaimed and New York Times bestselling Seven Realms series are available in one place. Packed with romance, action, intrigue, and adventure, The Demon King, The Exiled Queen, The Gray Wolf Throne, and The Crimson Crown are epic fantasy at its very best.
12
-1
2 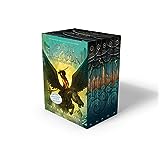 0 Comments
All five books in the blockbuster Percy Jackson and the Olympians series, in paperback, have been collected in a boxed set fit for demigods. Now with glorious new cover art and packaged with a special poster, this value-priced set includes the best-selling The Lightning Thief, The Sea of Monsters, The Titan's Curse, The Battle of the Labyrinth, and The Last Olympian. Whether it is for readers who are experiencing Percy's thrilling adventures with Greek gods and monsters for the first time, or for fans who want to devour the saga again, this gift will be prized by young and old.
13
-1
2

The Emperor's Blades: Chronicle of the Unhewn Throne, Book I

In The Emperor's Blades by Brian Staveley, the emperor of Annur is dead, slain by enemies unknown. His daughter and two sons, scattered across the world, do what they must to stay alive and unmask the assassins. But each of them also has a life-path on which their father set them, destinies entangled with both ancient enemies and inscrutable gods.

Kaden, the heir to the Unhewn Throne, has spent eight years sequestered in a remote mountain monastery, learning the enigmatic discipline of monks devoted to the Blank God. Their rituals hold the key to an ancient power he must master before it's too late.

An ocean away, Valyn endures the brutal training of the Kettral, elite soldiers who fly into battle on gigantic black hawks. But before he can set out to save Kaden, Valyn must survive one horrific final test.

At the heart of the empire, Minister Adare, elevated to her station by one of the emperor's final acts, is determined to prove herself to her people. But Adare also believes she knows who murdered her father, and she will stop at nothing?and risk everything?to see that justice is meted out.

Other books in the world of the Unhewn Throne
Skullsworn (forthcoming)

4 avg rating
1 Comments
The fourth book in the Lightbringer series from New York Times bestseller Brent Weeks.
When does an empire fall?
The Seven Satrapies have collapsed into four-and those are falling before the White King's armies.
Gavin Guile, ex-emperor, ex-Prism, ex-galley slave, formerly the one man who might have averted war, is now lost, broken, and trapped in a prison crafted by his own hands to hold a great magical genius. But Gavin has no magic at all. Worse, in this prison, Gavin may not be alone.
Kip Guile will make a last, desperate attempt to stop the White King's growing horde. Karris White attempts to knit together an empire falling apart, helped only by her murderous and possibly treasonous father-in-law Andross Guile.
Meanwhile, Teia's new talents will find a darker use-and the cost might be too much to bear.
Together, they will fight to prevent a tainted empire from becoming something even worse.
Lightbringer
The Black Prism
The Blinding Knife
The Broken Eye
The Blood Mirror
Untitled Lightbringer Novel #5
For more from Brent Weeks, check out:
Night Angel
The Way of Shadows
Shadow's Edge
Beyond the Shadows
Night Angel: The Complete Trilogy (omnibus)
Perfect Shadow: A Night Angel Novella (e-only)
The Way of Shadows: The Graphic Novel
15
0
2

They recruited Emily Ruff from the streets. They said it was because she's good with words.

They'll live to regret it.

They said Wil Parke survived something he shouldn't have. But he doesn't remember.

Now they're after him and he doesn't know why.

There's a word, they say. A word that kills.

The Oracle: Ancient Delphi and the Science Behind Its Lost Secrets

Like Walking the Bible, this fascinating book turns a modern eye on an enduring legend. The Oracle of Delphi was one of the most influential figures in ancient Greece. Human mistress of the god Apollo, she had the power to enter into ecstatic communion with him and deliver his prophesies to men. Thousands of years later, Pulitzer Prize

The Magicians: A Novel

0 Comments
The New York Times bestselling novel about a young man practicing magic in the real world, now an original series on Syfy

Simon Snow is the worst Chosen One who's ever been chosen.

That's what his roommate, Baz, says. And Baz might be evil and a vampire and a complete git, but he's probably right.

Half the time, Simon can't even make his wand work, and the other half, he sets something on fire. His mentor's avoiding him, his girlfriend broke up with him, and there's a magic-eating monster running around wearing Simon's face. Baz would be having a field day with all this, if he were here -- it's their last year at the Watford School of Magicks, and Simon's infuriating nemesis didn't even bother to show up.

Carry On is a ghost story, a love story and a mystery. It has just as much kissing and talking as you'd expect from a Rainbow Rowell story - but far, far more monsters.