0 avg rating
Book 25 of 39 in the Portal Fantasy Books
1 votes 0 comments
"A TREASURE!" --Three-time Hugo-winner Mary Robinette Kowal
Old Mr. Heldrick is every bit as dangerous as the kids imagine--not because he's a demented killer but because his house hides a portal to another world, and he's the guardian. When Bess is caught in his basement, she's forced to flee through that doorway, not knowing where it leads.

She finds herself in a nightmare world controlled by black-cloaked, knife-wielding horsemen. Within minutes she's on the run. Lost and hungry, she steals and eats fruit from an orchard, which turns out to be poisonous and nearly kills her before she reaches a farm family who take her in. The family members hide her and nurse her back to health, at great risk to themselves. Then, just when she's nearly recovered, the trackers arrive....

And that's when her adventure truly begins.

Full of intrigue, suspense, and surprise, CLOAKS has been called "a shining example of the genre" by Nebula nominee Sylvia Spruck Wrigley. It will keep you glued until the last page.

The Heart Of Hannen
by Fawn Bonning

The Wheel Of Time
by Robert Jordan 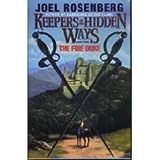 Keepers Of The Hidden Ways
by Joel Rosenberg

Azabars
by Jem I Kelley

Alice Through The Looking Glass
by Kari Sutherland

Cloaks ( ranks on the following lists