1 avg rating
Book 8 of 41 in the Best Steampunk Fantasy Books
14 votes 1 comments
''Being a female bounty hunter, Coyote made men nervous. Being an official, she made them wary. But being the best gunman, or in her case, gunwoman around, Coyote made them downright anxious. The popular consensus was that women shouldn’t be allowed to be bounty hunters, but no one dared say this out loud when Coyote was around.''

No one knows where or when the rips will appear, but they do, and from them, Outlanders walk the earth. Coyote travels the territories with Caesar, her mysterious partner in the bounty hunter business, and together they confront these alien threats to humanity. Along the way, Coyote discovers a secret that threatens to shatter everything she believes about herself, her father, and her sworn enemy, James Westwood. Whether Outlander or inner demons, some things can't be solved with a six shooter.

Chantal has crafted an amazing story of intrigue and adventure set in the wild west. I instantly fell in love with her protagonist, Coyote. In fact all the characters came alive in this adventure. I can't wait for the next installment to her series. This is REALLY good!

~Charles Day, Bram Stoker Award® nominated author of LEGEND OF THE PUMPKIN THIEF and THE HUNT FOR THE GHOULISH BARTENDER

About the FREE Second Screen: Reading itself is a favorite pastime, but with ‘Coyote: The Outlander’ we wanted to add a little extra by offering you a free second screen experience. Within the book you’ll find four icons of a safe. Each of these will come with the secret code for that part of the book. Simply go to the website ‘www.coyotethebooks.com’ and unlock the corresponding safe.

You will find FREE content, such as extra storylines, background music, selected for that part of the story. We advise you not to read ahead of the story, because the extra content may contain spoilers.

~The Tip My Hat team, Publishers of Coyote: The Outlander 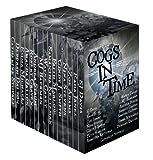 Cogs In Time 2
by SJ Davis

Demon In Steam
by Lexi Ostrow

The Atomic Sea Volume One
by Jack Conner

Coyote: The Outlander ranks on the following lists