Visible
kentdoc
Wizards and heroes abound, but what about healers?

Lord Of The Rings

The Wheel Of Time

The Deeds Of Paksenarrion

The Magic And The Healing

Luck In The Shadows

4.5 avg rating
10 Comments
Set in a world of ominous landscape and macabre menace, The Dark Tower features one of Stephen King’s most powerful creations—The Gunslinger, a haunting figure who embodies the qualities of the lone hero through the ages, from ancient myth to frontier Western legend. As Roland crosses a desert of damnation in a macabre world that is a twisted image of our own, he moves ever closer to the Dark Tower of his dreams—and nightmares.
British Fantasy Society

0 Comments
ONE OF THE MOST POPULAR FANTASY TALES OF ALL TIME. NOW AN EPIC TV SERIES.

Thousands of years after the destruction of the age of man an d science, new races and magic now rule the world, but an imminent danger threatens. A horde of evil Demons is beginning to escape and bring death upon the land. Only Wil Ohmsford, the last of the Shannara bloodline, has the power to guard the Elven Princess Amberle on a perilous quest to the save the world, while the leader of the Demon force aims to stop their mission at any cost.

“Shannara was one of my favorite fictional worlds growing up, and I look forward to many return trips.”—Karen Russell, author of Swamplandia!

“If Tolkien is the grandfather of modern fantasy, Terry Brooks is its favorite uncle.”—Peter V. Brett, author of The Skull Throne 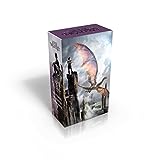 Every two hundred years or so, on the planet colony of Pern, shimmering Threads fall from space, raining death. Yet the great dragons of Pern, mounted by the stalwart dragonriders, scour the skies with fire to destroy the deadly Thread and save the planet.

Here we meet Menolly as she navigates her way as the first journeywoman Harper in the history of Pern; and fellow student Piemur whom is secretly asked to leave Harper Hall, drafted by Masterharper Robinton to embark on a dangerous mission to the Southern Hold.

The Harper Hall trilogy, set within science fiction legend Anne McCaffrey’s beloved and bestselling Dragonriders of Pern series, is a seminal work and a must-have for any fantasy or science fiction fan.
Add item
ITEMS 1 - 14 of 14

Anonymous | 2018-04-28 08:39:21
Readers of the fantasy books will like this one plot also that brings something new and special for them. Students get rid from writing problems after hiring of assignment services australia that is very nice option for their perfect works.