Visible
kentdoc
Where did all the vampires and werewolves come from before they stalked into our bookstores and demanded their own section? UF may have started with Apuleius or maybe with Dickens and Stoker, but it really took off after Buffy TV series started (1997). Here are the works that got it started.

The love between a father and daughter is forever. Life has a natural order: we are born, we age, we die. It is a cycle that has repeated itself since the beginning of time and is not to be interrupted. However, when Cami was only twelve years old, everything natural was taken from her. Cami is a vurdalak - a vampire - cursed to wander the earth, plagued with an insatiable hunger. She is pursued by the very one who created her and has learned to harden her stilled heart to survive. Nevertheless… when she meets Richard, a man who seems to hold clues to her past, she realizes that she can harden her heart to survive, but must soften it to live.

Wizard Of The Pigeons

War For The Oaks 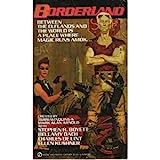 The Fantasy Worlds Of

Interview With A Vampire

The Fool On The Hill